In The Real World

Undines or Odines are elemental water spirits that are mentioned and documented in many different texts, ranging from ancient European folk-lore as fairy creatures to ancient Greece and Rome; Often, they are tied to alchemy. They are said to be able to steal a soul by marrying a human man and bearing his child.

Overall, besides stealing the occaisional soul, Undines do not appear to be especially malevolent, especially when compared to other water elementals, such as Kelpies and Red Caps.

Traditionally, Undines are seen as mermaid or angelic like beings, often beautiful, aluring and very tempting to human kind.

In The Real Ghostbusters 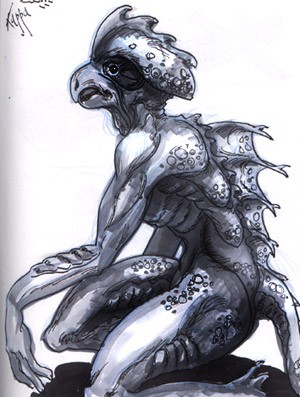 A Kappa that bears a resemblence to the Undines in "The Devil In The Deep".

In The Real Ghostbusters Episode, "The Devil In the Deep", New York City finds itself in the grip of a heat-wave while out in the East River, things get really hot when one of the Great Old Ones, a water god named Nexa is woken from his age long slumber by pipe layers.

Nexa's emergence triggers a violent outbreak of hauntings across the city, mostly in the water supply causing mass panic. The hauntings are said to be the result of undines, or water elementals. The Undines in the episode are characterized as malicious almost Kappa like creatures, although Egon does make the comment that they are normally benevolent. It is unknown what triggered their shift in behaviors but it can be implied that Nexa's return to our world may have had a large influence over them.

It is unknown what happened to the Undines once Nexa left New York but it is assumed that the Undines reverted back to their pre-Nexa state or went with him.