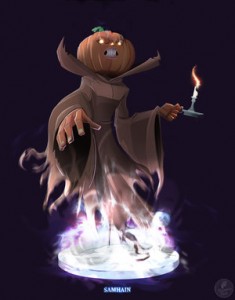 "You are fools, and fools deserve a swift demise!"
Voiced by: Frank Welker

When Halloween Was Forever

Samhain is the malevolent spirit of Halloween, and the self-proclaimed ruler of the night, and all of its creatures. His origins can be traced back to 7th century, Ireland. According to legend, this was where Halloween first began with the Feast of Samhain.

Samhain is most powerful on Halloween night. His presence envelopes the world in a never-ending darkness, and time stops completely, thus ensuring that Halloween lasts forever. It was said that no one could stop him, but he could be subdued. His spirit was trapped in a massive tomb, where he remained dormant until 1986.

Samhain's ruins were discovered and brought to New York to be placed on display at a museum. A pair of goblins discovered Samhain's container there, and together they released him from his prison to wreak havoc on the world once again.

The Ghostbusters quickly mobilized to stop him. They discovered that his weakness was light, and managed to trap him with the use of massive search lights.

One year later, the same goblins that first released Samhain intruded into the firehouse. Their presence went unnoticed, as the Ghostbusters were amidst a large costume party to celebrate Halloween. They freed Samhain from the containment unit.

Samhain announced that his first priority was to carry out a vendetta on the Ghostbusters. He proceeded to transform their headquarters into a massive, impenetrable fortress of his own design.

With the help of the Junior Ghostbusters, Samhain was defeated once again.

Although Samhain never made an official appearance on the show, a new rendition of him can be seen in the opening title sequence.