From GBFans.com
(Redirected from Ray Stantz)
Jump to navigation Jump to search

Venkman's colleague and best friend. A hard scientist with a good academic background, Stantz is a maverick who genuinely loves a challenge. - Original Script Description

In the commentary on the Ghostbusters DVD, Ray is also described as the "heart" of the Ghostbusters team. He leads with his heart and exhibits the childlike enthusiasm that keeps the team going.

Ray was portrayed by Dan Aykroyd, who is admittedly interested in the paranormal and occult, which may explain why Ray seemed to be the most motivated of the Ghostbusters..."busting heads-in a spiritual sense," of course. Dan Aykroyd helped to design the proton pack, trap, and other "busting tools."

Even though Ray seemed skeptical about the existence of God, he DID seem to have a working familiarity with Biblical folklore, although his quote from Revelation was off by a chapter. And even described (with Venkman) to Mayor Lenny that NYC's takeover had Biblical, "Wrath-of-God" proportions. In the Video Game his description of Black Slime implies he believes in the concept of a soul. Additionally, he spoke of playing 'Ghosts and Gargoyles' in seminary, which is generally a Christian graduate school in most circumstances.

In the novelization, Ray's relatives were listed as a bisexual sister with a daughter, and a macho brother with two boys in military school. Ray's father, also a doctor, willed him the house not because he felt Ray was more worthy, but that after Peter had come with him to a family dinner once and seduced Ray's sister, he figured Ray was going to need all the help he could get.

Also in the novelization, Ray's parents were said to have disappeared in a plane flight that vanished without a trace. Egon kept insisting to Ray that they might still be alive in the Bermuda Triangle, until Ray finally punched him.

The "dream sequence" where Ray is seduced by a widowed ghost was actually originally filmed as an actual mission. Ray and Winston were sent out to a museum. On a lark, Ray had decided to try on a Napoleonic era uniform and was lying on a replica bed when she appears. This scene was later re-edited into the movie as a dream. A picture of Ray and Winston exiting Ecto-1 in front of the museum can be found in a storybook based on the film, although it wasn't referred to in the story anywhere. In real life, Aykroyd was filmed driving the Hearse off of private premises, before authorities arrived on scene.

Possibly for being the most open-minded of the group, his body and will were possessed by Vigo the Carpathian. 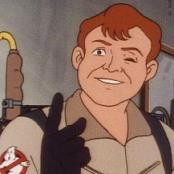 Ray Stantz is an amiable, excitable, open-hearted enthusiast who still sleeps with a Dopey Dog doll and watches cartoons like "Murray the Mantis" and "Sammy K. Ferrett". Though he may act goofy and almost childlike, he's an occult scholar second to none, and a gifted engineer: he built a shapechanging car back in shop class, and is the one who actually built the Ghostbusters' equipment. He's the only one who can (usually) keep up when Egon starts detailing his wild theories, and the two collaborate on experiments often.

Ray Stantz hails from a family of Russian immigrants, and his closest relative, his Aunt Lois, owns a large house that their ancestors built in the 1860's. He also had a "long lost" Uncle Gaylord, who left Ray his joke shop, and a Scottish uncle, Andrew MacMillan, who left Ray a castle and a title. He has at least one cousin, Samantha, who owns the old farm formerly belonging to the Peterson family.

Ray shares duties driving the ECTO-1 (which he actually purchased in the first place) with Winston, and also is the one who most often flies the ECTO-2 copter (he once won one free flying lesson!) He's also the Ghostbuster most likely to wear his work gloves and a set of ecto-goggles.

Ray is the one who decided to keep Slimer as a pet, and the two pal around a lot. Ray was even the one who gave the ghost the name "Slimer" "Just to annoy Peter"

Ray had a childhood crush on Elaine Fuhrman, who still lives back in the same small town the two were raised in, Morrisville. They were reunited when Ray went back home to recieve honors from his home town, though it doesn't seem they kept in touch after that.

According to Extreme Ghostbusters, once the Ghostbusters go out of business Ray goes back into research. After blowing up a lab, he's kicked out of the job and later sold used cars for Perpetual Motors. For some unfathomable reason, he wears one of Egon's flight suits instead of his own.

Ray: Of course you forget, Peter. I was present at an undersea, unexplained mass sponge migration.

Ray: Well, this is great. If the ionization-rate is constant for all ectoplasmic entities, we can really bust some heads... in a spiritual sense, of course.

Ray: You've never been out of college! You don't know what it's like out there! I've *worked* in the private sector. They expect *results*.

Ray: My parents left me that house! I was *born* there!

Ray: Wow. This place is great. When can we move in? You gotta try this pole. I'm gonna get my stuff. Hey. We should stay here. Tonight. Sleep here. You know, to try it out.

Ray: Uhhh... this magnificent feast here represents the *last* of the petty cash.

Ray: This is where we store all the vapors and entities and slimers that we trap. It's simple really. Loaded trap here...open and unlock the system...insert the trap...release...close and lock the system...set your entry grid...neutronize your field...and the light is green, the trap is clean. The ghost is incarcerated here in our custom-made storage facility.

Ray: Everything was fine with our system until the power grid was shut off by dickless here.

Ray: As a duly-designated representative of the City, County, and State of New York, I order you to cease any and all supernatural activity and return forthwith to your place of origin or the nearest convenient parallel dimension.

Ray: I tried to think of the most harmless thing. Something I loved from my childhood. Something that could never ever possibly destroy us. Mr. Stay Puft!

Ray: Forget MIT or Stanford now! They wouldn't touch us with a 10 meter cattle prod!

Ray: Listen! Do you smell something?