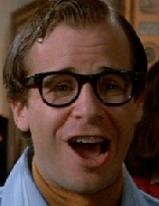 Louis is a shy nerd, hopelessly in love with Dana. - Original Script Description

Louis Tully is a CPA and tax attorney who lives in an apartment across from Dana Barrett in the Shandor building at 55 Central Park West. He is shown several times awkwardly accosting and attempting to flirt with Dana, usually locking himself out of his apartment in the process. Louis plays an important role in the coming of Gozer when he is possessed by Vinz Clortho, the Keymaster of Gozer, after one of the terror dogs enters his apartment and chases him across Central Park. Once possessed, Louis/Vinz runs amok around town and is eventually picked up by the NYPD and brought to the Ghostbusters HQ, where Egon Spengler takes him in for testing and questioning. After determining his possessed status, Egon realizes the importance of keeping Vinz in his custody, but when Walter Peck arrives and shuts down the containment grid, Vinz escapes in the ensuing chaos, and wanders the city until arriving at the Shandor building, where he finds that Dana Barrett, who has been possessed by Zuul, the Gatekeeper of Gozer is waiting for him at her apartment. The two possessed neighbors embrace among increased paranormal activity following the explosion at the Ghostbusters HQ, and it is insinuated that their union is consummated soon after in front of Gozer's temple gate. After uniting they both stand on the terror dog pedestals where their possessors broke out of and are shot with lightning which they redirect at the temple doors to force them to open. Once they achieve the opening of the doors Dana and Louis are transformed into a pair of terror dogs who growl menacingly at the Ghostbusters and sit at the side of Gozer. After the Ghostbusters defeat Gozer and the Stay Puft Marshmallow Man, Louis and Dana are reverted back to their former selves, and are freed from the charred remains of their dog forms.

In the second film, we see Louis defending Ray, Egon, and Peter after they are arrested for drilling a hole in the middle of the street. When the Scoleri Brothers are released and begin destroying the courtroom, Louis convinces the judge to drop all charges in order to get the Ghostbusters to take care of the problem. When the Ghostbusters reopen for business, Louis is seen to be working as their accountant. He also develops a relationship with Janine Melnitz while accompanying her to babysit for Oscar. At the end of the movie, Louis can be seen donning a suit and pack in an attempt to help the rest of the Ghostbusters.

Rick Moranis likes to work around the lines given to him in a script, so much of Louis' dialogue is improvised, although a large number of his lines in the movie were also written in the script by Ramis, Reitman, and Aykroyd. The role of Louis Tully was originally offered to funny man John Candy in an attempt to reunite him with Bill Murray and Harold Ramis, and early storyboards of the film show drawings of Louis played by an actor who looks just like Candy. Candy brought some of his own ideas to the table, wanting to play the character as a German man who owns several large dogs. Candy passed on the project when the creative team shot down his ideas for Louis Tully, and another of his SCTV co-horts, Rick Moranis, stepped in to take his place. [1] 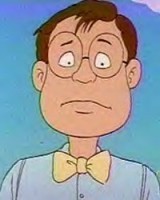 Who does your taxes?

Louis Tully is an accountant and lawyer, and was possessed during the Ghostbusters' battle with Gozer. He was hired by the Ghostbusters in the second movie, and joined the RGB cast to reflect that. As he's not very capable with a proton pack, knows nothing about the paranormal, and his job is boring, he doesn't appear very much--but did help out a time or two, and had his own flight suit.

Louis has a nephew, Lawrence, who is a spoiled brat. Louis keeps trying to buy the "right" birthday presents for him, but Lawrence isn't very grateful.

A few early episode of Season 5 seem to follow after GB2, depicting Louis as in a relationship with the Ghostbusters' receptionist, Janine Melnitz, but eventually the writers restore her earlier relationship with Egon Spengler. One issue of the Now Comics has Egon and Janine expressly arguing about Louis, where she dismisses him as "Sweet but harmless"

In his one NOW comics appearance it seems Louis comes by to keep Janine company while Egon and the boys are out of town on a mission. He's apparently not allowed to drive Ecto-1. It is also notable that while he had brown hair in the animated series, his hair was black in the comic book.

In another similarity to his movie counterpart, deep down Louis really wants to be a hero and do good. He does look up to the Ghostbusters and always tries to be worthy of their respect. He also likes kids and tries to be a good Uncle to his nephew.

Louis: Oh, no, I feel great. I just ordered some more vitamins. I see you were exercising. So was I. I taped '20 Minute Workout' and played it back at high speed so it only took ten minutes and I got a really good workout. You wanna come in and have a mineral water or something?

Louis: Gee, I think all I got is acetylsalicylic acid, generic. See, I can get six hundred tablets of that for the same price as three hundred of a name brand. That makes good financial sense, good advice. Hey, this is real smoked salmon from Nova Scotia, Canada, $24.95 a pound! It only cost me $14.12 after tax, though. I'm givin' this whole thing as a promotional expense, that's why I invited clients instead of friends. You havin' a good time, Mark? How you doing? Why don't you have some of the brie, it's at room temperature! You think it's too warm in here for the brie?

Louis: Okay, who brought the dog?

Louis: Gozer the Traveler. He will come in one of the pre-chosen forms. During the rectification of the Vuldrini, the traveler came as a large and moving Torg! Then, during the third reconciliation of the last of the McKetrick supplicants, they chose a new form for him: that of a giant Slor! Many Shuvs and Zuuls knew what it was to be roasted in the depths of the Slor that day, I can tell you!

Louis: Yes, have some.

Louis: I am The Keymaster!

Louis: Who does your taxes?

Louis: Your Honor, ladies and gentleman of the audience, I don't think it's fair to call my clients frauds. Sure, the blackout was a big problem for everybody. I was trapped in an elevator for two hours and I had to make the whole time. But I don't blame them. Because one time, I turned into a dog and they helped me. Thank you.

Louis: So the 7 little dwarves had a limited partnership in a small mining operation. And one day a beautiful princess came to live with them. And they bartered housekeeping services for room and board, which was a real good deal for them because they didn't have to withhold social security or income tax or nothin', which you're really not supposed to do, you see, but for the purpose of the story, I think it's okay.

Louis: I used to have a roommate, but my mom moved to Florida.