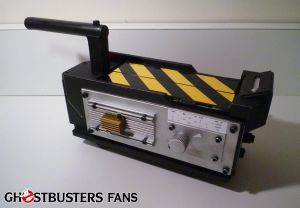 A piece of ghostbusting equipment almost as important as the proton pack in the Ghostbusters universe, the ghost trap was used for detaining and transporting "busted" ghosts until they could be safely stuffed into the Ecto Containment Unit. Believed by some to entrap the ghost with a laser containment field, precisely how the trap works was never fully explained in the films.

For filming, the production utilized hero, stunt, and smoking traps. The hero traps were designed to be cosmetically appealing (including a removable trap "cartridge" and rolling wheels), while the stunt traps were made for action sequences. The smoking traps included strips of fabric along the sides to which an SFX smoking liquid was applied, giving the appearance of a recently-trapped spook.

The ghost traps were worn on the Ghostbusters' belts via a custom belt attachment, and each included a pedal for opening the trap remotely while a ghost was held in the proton pack's containment stream.

Although the traps look similar in both Ghostbusters 1 and 2, there are subtle differences in several details as well as overall shape. Most noticeable is the colour of the tubes on the left side of the trap. These were red in GB1 and silver in GB2 . It is believed the smaller size of the trap in Ghostbusters 2 was because the actors complained about the weight of the traps. Like the proton pack, the ghost trap has been exhibited by Planet Hollywood. The trap closing sound effect sequence and the beep after the trap closes were also different between GB1 and GB2.

In Ghostbusters, Ray advises Egon against looking at the trap. In the Braxtan fanfilm, Return of the Ghostbusters, this comment is expanded upon, the characters describing how the soul can be pulled through the eyes into a trap, subsequently being stored like a ghost.

However, as evidenced in the films it is more likely that looking directly into the trap will blind you, not steal your soul. In Ghostbusters it was simply that Egon was not close enough to be blinded by the trap, but was clearly bothered by looking into the Ghost Trap.

In Ghostbusters II all three Ghostbusters look away when the trap is opened during the courtroom scene. During the montage when Peter opens the trap he has his eyes closed, evidenced when he says, "bye-bye." Ray was not affected by the opening trap because he was wearing the Ecto-Goggles.