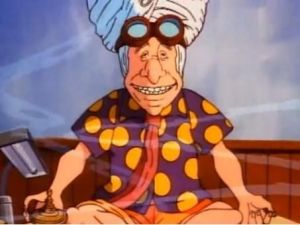 Djinn, or jinni, are anicent illusion-casting specters who live for centuries, can manifest in any form and travel anywhere instantly. Like the Greek daimon, they are spirits of an intermediate nature, between mortals and gods, and while most are neutral, some are down right evil.

It is said in the Q'uran that they are an ancient species who were created before humankind from smokeless fire.

It is also said that for each human born, a Djinn is also born as a kind of supernatural twin, a qareen, who tempts the human being from birth to do the wrong thing. Djinn are closely intertwined into human affairs and are known to be fond of granting wishes, often twisting them to their own cruel ends on the unlucky human who releases them often from a sealed glass lamp or container.

One such legend tells of a fisherman who fished up an old lamp and unsealed it, releasing a vengeful djinn who, after centuries of waiting, decided to grant one wish to his emancipator: the method by which the djinn would kill him.

The fisherman, naturally terrified beyond his wits, used his brain rather than brawn to beat the djinn at it's own game, stating he did not believe the djinn could grant wishes so he requested the djinn prove it. As proud creatures, the djinn took the challenge; the fisher man told the djinn if it could make its self as smoke and shrink itself into the bottle, he would let the djinn kill him. The djinn proceded to do just that, shrinking itself back into the bottle at which point the fisherman moved as fast as he could, resealing the evil djinn back inside its tomb.

The fisher man then weighed the bottle down and threw it back into the river, where no one could ever dredge it up again. 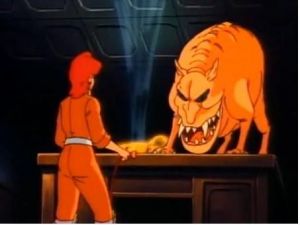 The Ghostbusters encounter a djinn of their own in the episode "Janine's Genie" when Janine requests to go on a job with the guys for the first time, after getting bored of being stuck at her desk all the time while the guys got to have all the fun.

After a bust at an old warehouse, Janine takes an old antique lamp as payment, much to the chargin of Peter and the amusement of the others. Determined to prove her lamp is worth something after all, Janine rubs it and releases the djinn (unbeknownst to the others), who takes the form of a little man in a turban. He grants Janine two wishes, twisting them so that they are extremes of what she asked for. After playing with her desires and wishes, the djinn is left in the firehouse alone and opens a gateway from the lamp to our world, releasing an untold amount of demons and specters from the Netherworld of the lamp into our dimension.

After a nearly fatal airplane crash and some fancy seat of the pants flying, Janine and the guys return home to the firehouse to see it turned into a portal to the Other Side as ghosts are escaping by the hundreds. Janine risks her life to reseal the lamp and suck all the ghosts back to their world after the djinn refuses to grant her last wish and reveals its true form, a demonic hound like specter who turns on her. With true bravery, Janine and the Ghostbusters force the evil djinn back through the lamp and seal him for good in his own dreary dimension forever, breaking the spells the djinn had cast for good.