Indy Magnoli is making flight suits from both films... 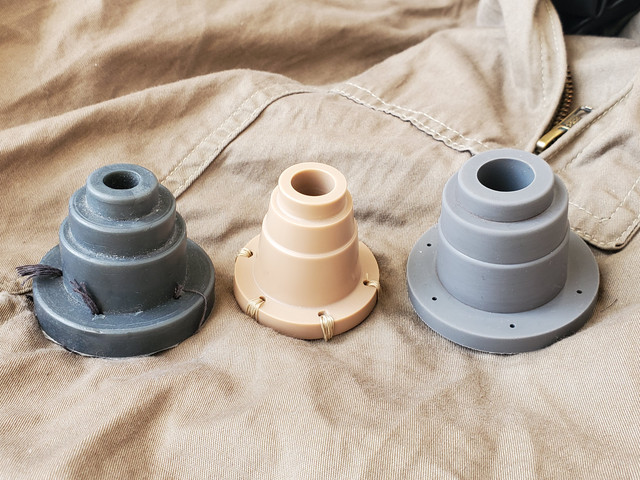 Note that my GBFans is slightly modified, having sanded it a little and added tan to the gray rubber. I'll still probably warm up the gray a little more though, perhaps with some yellow.
RedSpecial, JWils23 liked this 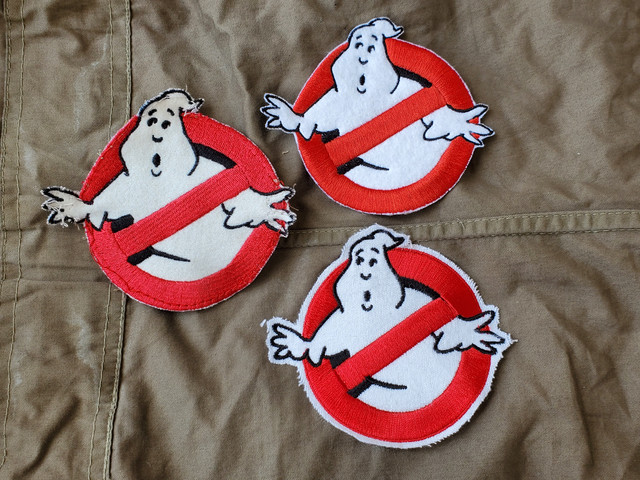 Here's a comparison of the different Stantz patches. Magnoli on the left, Todd Cook on the top, Calgary on the bottom. Magnoli is the biggest, then Calgary (even without the excess white fabric), then Todd Cook. I'd say the stitching, line thickness, and hue of red look the most accurate on Todd's, making it the winner still. However, Magnoli's white felt looks the closest to screen accurate. Not just the color, but it has a subtle texture that sort of looks woven still. The real patches have that too, which the Calgary Ghostbusters interpreted as the woven fabric they selected for their patch (athough I don't think it's quite right).

My advice to Magnoli though would be to copy the Venkman patch design instead, drawing fewer comparisons between the patches. The Venkman patch has pretty clear photos available and nobody is currently producing an accurate one in felt, to my knowledge. Or maybe ultimately give the option to select a patch version.

Plus what the hell is going on with this black thread being used to stitch on the hose connectors...Why is it black and why is the thread looking like it’s big enough to tow a truck!

In my opinion. Indy has tried to do much here. I believe he should focus on the flightsuits.

Very few people have had major complaints about the suits themselves beyond slight sizing issues. I also agree completely on the waist elastics being too big and literally pointless for their intended use of tightening the fit of the suit.

I believe Magnoli would have made his life easier if he only done the suits and skipped the patches and name tags or at least made them optional extras. Problem with the patches and hose connectors. Everybody has a different opinion and there was such variety in the source material you can’t please everybody.
infinacy liked this

By Indy Magnoli -  April 16th, 2021, 5:18 pm
-  April 16th, 2021, 5:18 pm#4948262
No one is settling for anything. Anyone who is not happy with what they received has been in communication with us and we're finding suitable solutions on a case-by-case basis. We're working on getting all critiques sorted and updated patterns, patches, etc as best we can. Thanks to all who have been helping out throughout this process!
mike_waclo, RedSpecial, kind2311 and 5 others liked this
www.magnoliclothiers.com

Indy Magnoli wrote: ↑April 16th, 2021, 5:18 pm No one is settling for anything. Anyone who is not happy with what they received has been in communication with us and we're finding suitable solutions on a case-by-case basis. We're working on getting all critiques sorted and updated patterns, patches, etc as best we can. Thanks to all who have been helping out throughout this process!

You are an excellent businessman and prop maker. I appreciate all of your efforts. I love my suit, and the work you put into it clearly shows.
Indy Magnoli, mike_waclo, Glenn Frederick and 1 others liked this

I know the quality is there and it just needs final tweaks. I also know first hand of your customer service and attempts to put things right.

Personally I wouldn’t waste my time following these updates and commenting if I didn’t believe in the product so I know 100% that even with the slight issues that are happening which is to be expected with the initial release of such an ambitious project that these suits are currently the best on the market right now. No other suit comes anywhere close!!
Indy Magnoli, infinacy liked this

By Nuclearjungle -  April 17th, 2021, 8:44 am
-  April 17th, 2021, 8:44 am#4948281
Well, I could't settle in terms of the accuracy of my suit. Magnoli did give me a 50% refund on the botched suit, but I actually ended up ordering an entire new suit at full price, just to get one correct suit the way I originally ordered it a year ago. I'm hoping this new order can at least be done quickly, although my questions about waiting time are going unanswered. I understood Magnoli's reputation to be good, and I'd even recommended his company at the studio where I work, since we're currently working on a big property that he famously does replicas for. But so far, my experience with this suit has not been a positive one.

I originally thought I'd be completing my suit this weekend, but I'm still working on the parts I have regardless. Here's the updated GBFans hose connector, modified with a warm gray color. Similar to the real connector though, it's difficult to photograph, as it usually appears either tan or neutral gray on camera. 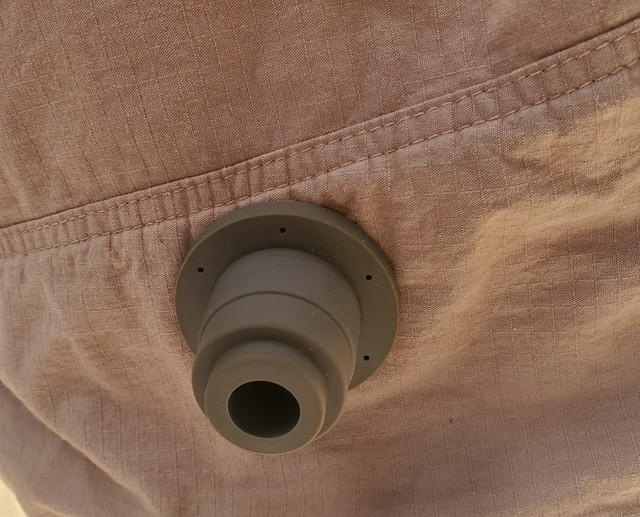 By Glenn Frederick -  April 17th, 2021, 1:28 pm
-  April 17th, 2021, 1:28 pm#4948296
I've been keeping up with these suits on here and the RPF and i'm very impressed with the work that Indy Magnoli has put into these. He's listen to everyone's input and suggestions and has made these suits absolutely perfect but what I don't understand why we're not helping him with pictures and measurements of SCREEN USED patches and Leg Hose Connectors instead comparing Magnoli's versions to other replicas?

I get some replicas nailed the look but we're basically telling Indy Magnoli to Replicate a Replica instead of helping him to replicate a screen used item. When I see all of the Replica patches together it really makes me appreciate each one because while they're suppose to be replicating one particular screen used patch, you can see the unique nuances of each one due to their maker and that's because each Patch was designed from the ground up replicating a certain Screen Used Patch. If something is off or wrongly sized with Indy Magnoli's patch it should be brought to his attention because measurements were taken from a screen used patch instead of relying on what size another person patch is.


I own all the patches and leg hose connectors already mentioned and I can give each one of them a review on how great they are but that doesn't help with the information that Indy Magnoli needs to get HIS Patch and Connector created so he can finalize a product that most of us can agree on and get these suits rolling out.
This site has a wealth of knowledge on the Patches and Connectors but Indy Magnoli is still new here and I think we can all help him by gathering up information with reference pics and known measurements.

As far as the material being used to make leg hose connector, I would prefer a softer rubber used instead of a harder rubber. I know there are other members here that have handled the screen used connectors that can verify if they were made from a soft material or were from a harder material but some of the reference pics (to me at least) seem to imply a softer rubber was used.

By RedSpecial -  April 17th, 2021, 1:48 pm
-  April 17th, 2021, 1:48 pm#4948299
I did provide info and images of a screen used patch over on the rpf and ZedR even offered to chip in with info of his screen used Stantz suit.
Many others have also volunteered information.
I can't offer help for the connector as I apparently don't have an accurate one at the moment or pics with measurements of a screen used example.
I don't think it's a case of folks not being willing to help Indy as much as it's a case of a lack of the relevant information in order to help with certain aspects.

There's also the issue of giving exhaustive measurements from someone else's replica, not sure what the stance is on that?
Is it regarded in the same vein as recasting or is it considered to be an OK thing to do?
Genuine question.
Glenn Frederick liked this

RedSpecial wrote: ↑April 17th, 2021, 1:48 pm There's also the issue of giving exhaustive measurements from someone else's replica, not sure what the stance is on that?
Is it regarded in the same vein as recasting or is it considered to be an OK thing to do?
Genuine question.

This is exactly why I didn't post measurements of the GBFans connector, despite it apparently being based on actual screen used measurements. It seems a little questionable.
RedSpecial liked this

Nuclearjungle wrote:Did you miss all the previous pictures of actual screen used connectors and patches? Alongside those, it's totally prudent to see how the current offerings rank against other replicas.

I've seen some reference pics and even Magnoli posted a pic of a screen used connector being measured but I've seen better pics around here of some connectors and the Stantz patch being measured. I'll do a search later tonight and see what I can find but my opinion is that actual measurements from screen used items would help make these more accurate, I'm sorry if you don't agree with me but that's just my opinion.
RedSpecial liked this

RedSpecial, mike_waclo, Glenn Frederick and 2 others liked this
Someone blows their nose and you want to keep it?

Haha I know, but I couldn’t resist...
RedSpecial, Glenn Frederick liked this
Someone blows their nose and you want to keep it?

Indy, I was wondering what reference photos you used for the design of the GB2 tan suit? The reason I ask is that I've noticed at least 2 pretty significant discrepancies between the pattern that you've used for your suit and the main suit design that is seen throughout the second movie.

The first issue is with the should fabric (not sure what the correct name for this is). On your suit, it goes all the way to the sleeve:

However, for the suits in the movie, it clearly does not go all the way to the sleeve. Attached are a couple of reference photos from auctions and movie screenshots showing this: Next, reference photos from auctions and movie screenshots:

Having said all of that, Indy, I love the Magnoli GB2 tan suit in so many other respects. As far as I know, nobody has attempted to recreate the herringbone suit before and I applaud you for doing it. I only bring these discrepancies up because I hope they can be addressed in order to make this suit as accurate as possible, both for myself (who really wants to purchase one if these corrections can be made) and the rest of the fan community.

I look forward to your response.

By JWils23 -  April 27th, 2021, 5:45 pm
-  April 27th, 2021, 5:45 pm#4948709
I got my tan GBfans connector in the mail today and I dig it. I like the composition of the rubber which is much softer than the original one I bought a few years ago or the heavy props connector. I’ll post a picture of it with my original so you guys can see color/shape when I get back home.
RedSpecial, tobycj liked this
Someone blows their nose and you want to keep it?

By JWils23 -  April 28th, 2021, 2:30 pm
-  April 28th, 2021, 2:30 pm#4948741
As promised, here are the pics of the new GBfans connector compared to the one I bought back in 2017 or 18. The one thing that really strikes me is the coloring, it's more of a yellow/dijon mustard color so I'll definitely have to work on dyeing it like nuclearjunlge did to get that darker color. But much softer rubber which I like a lot, you can easily manipulate the shape in your hands. 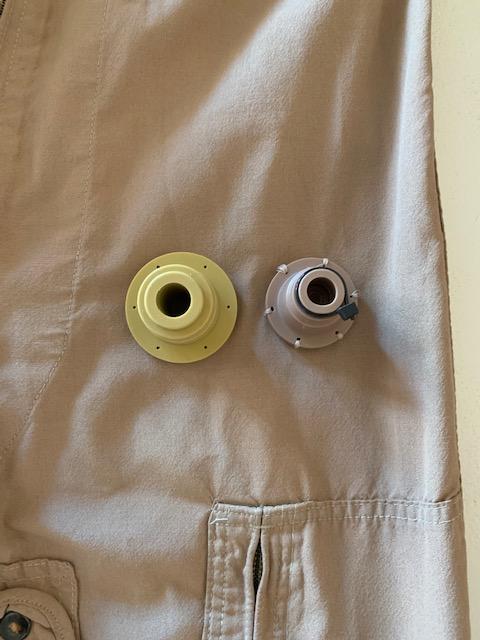 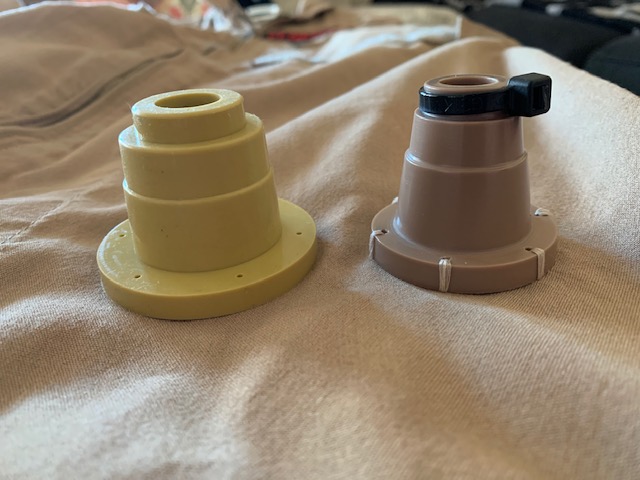 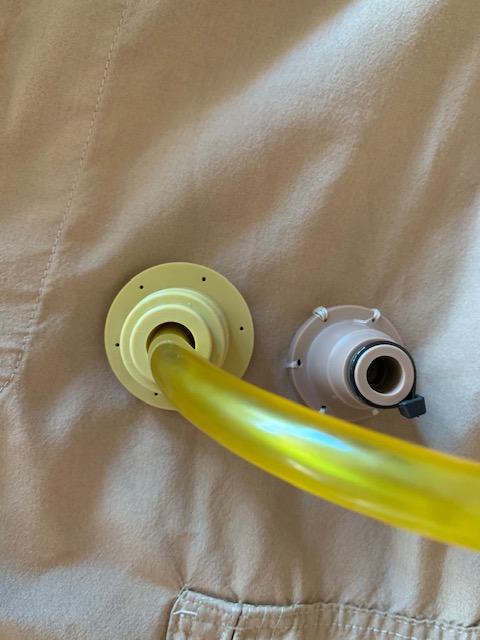 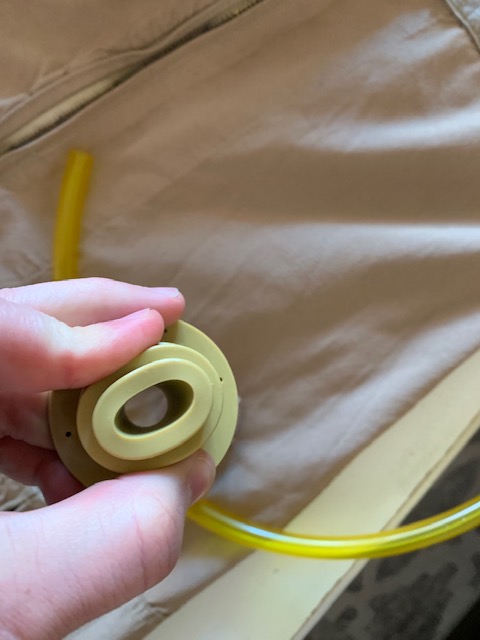 Someone blows their nose and you want to keep it?

Reply
Return to “Uniforms”
07May

We're bringing you the latest updates to the Ghost[…]

You keep blowing my mind, Alex. I think so far in[…]

I love the "Does the marshmallow man have b[…]