by Egoner
So I'm thinking of adding an Ecto-1 to my scale auto collection and I'm looking for some feedback from GB fans (the Ecto experts in particular) about the accuracy of the upcoming offerings. There are currently two upcoming Ecto offerings I have an eye on and I'm trying to decide which one is a better replica for me.
First off is the Blitzway 1/6 Ecto. 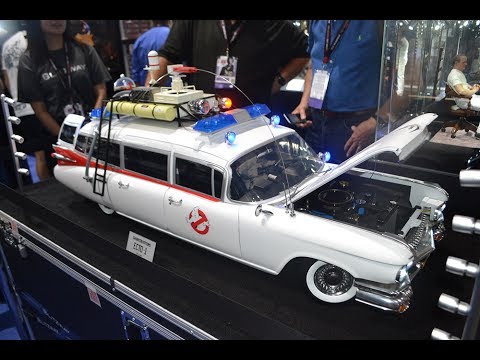 The other is the Eaglemoss 1/8 Ecto.

From what I've gathered, the Blitzways replica will be made mostly of plastic whereas the Eaglemoss replica will be primarily metal. I have no first-hand experience with Blitzway products but I do have experience building one of Eaglemoss's other large scale cars so I'm familiar with their quality and the partworks subscription method they use.

I'm curious which replica (based on the early prototype photos available) look more accurate? Ultimately, I imagine both will have inaccuracies so I'm lean toward doing the partwork build since it's easier to make mods before assembly than it is having to tear down a prebuilt.

I'm certain neither will have satisfactory lighting so I'll probably end up making a small arduino board that will operate all the siren lights.

by BRD 527
Well the first pic of the 1/6 scale ecto gets my vote it has the correct length front Code3 lightbar and mounts that were pictured in the movie where as the 1/8 scale model is based on the recently restored ecto 1 that used the incorrect front lightbar/mounts... Plus the 1/6 car is same scale as 12" action figures!

by joegianco
That's a good point about the Blitzway being in scale with the 1/6 figures but wouldn't the eaglemoss ecto be pretty close with the diamond select figures and even the firehouse diorama?

by ccv66
No I think it be to big, eagle moss being 1/8 and DST being 1/10. So if they're in it probably noticeably different. As a back drop probably not terrible. Think both would be fun, however id be worried about a subscription if the company ended up going under

The other is the Eaglemoss 1/8 Ecto.


Hi,
depends on your prefrences i guess.
I'd consider the Blitzway the more screen acurate (which means, how it actually was like in the movie), especially in regards of the general roof-setup and colours choosen....
Ok... it has some flaws of course: the blueish-tint of the lightbar-hoods seems a bit odd to me on that one and the scaling of the roof elements may be not a 100% in terms of scale (radome pole kinda short, A/C a bit over...stuff like that)- but anyway - i mean... damn - on the Eaglemoss-preview even the door-logo is wrong (missing the black background fill).

Well - in case you prefer metal>all (and the chrome really looks nice and shiny on that promo-pic of course), you prefer the current (post-restauration) look of the screen-used vehicle and have the faith and patience (plus - some color-issues could be fixed by simply painting the differently - except the wrong lightbar on the front), you might want to go the other way.

by UserNameChris
Any idea how long the Eaglemoss subscription is supposed to run before you complete it?

by back
No denying that it looks cool and no denying that I want one, but when its the size of my coffee table its no longer the question of money but its a question of "where in the hell could I even fit this in my house?!"

by UserNameChris
Suppose you could live in it...

Suppose you could live in it...

by Bandit13
2+ years I imagine from start to finish.
All times are UTC-06:00
Page 1 of 1
Powered by phpBB® Forum Software © phpBB Group
https://www.phpbb.com/