By AF-Ghostbuster -  October 17th, 2010, 1:08 pm - Posts: 46
-  October 17th, 2010, 1:08 pm #272352
Ok, I have been thinking of doing this for a while. Being in the Air Force, it is kinda hard to join a regional franchise due to the PCS (move) every few years. I would like to start an Air Force Ghostbusters franchise, or a Military Ghostbusters if there are not enough Air Force personnel here. I am working on an arm patch right now, and will post pictures as soon as I finish it. Who is intersted??!!
Rednecks last words.."Hey ya'll...watch this!!"

By exo95er -  October 17th, 2010, 1:19 pm - Posts: 618
-  October 17th, 2010, 1:19 pm #272354
That'd be an interesting concept - the U.S. military has their own line of commercial professions: electricians, IT specialists, criminal investigators, lawyers - why not it's own paranormal investigators and eliminators to deal with spooks and specters on military bases, ships, vessels, and aircraft?

I'd be interested. I'm not in the Air Force, so maybe a DOD or Combatant Command/Joint task force element.
"Why don't you take your flashlight and get lost?" - P. Venkman

We need to get a picture of the Magnum next to a B-2. The pun alone will make us MILLIONS.

Well, I know this is horrible. If anyone is better at photoshop, please try your hand at it!

By BlkMesaHero -  January 1st, 2011, 4:39 pm - Posts: 360
-  January 1st, 2011, 4:39 pm #292962
I would think using a Pentagon with the No Ghost logo would be best. It would comprise all services. A name like US Forces Paranormal Defense Team sounds good.
‎"I don't think a man know what he actually can do until he's challenged. I do think a man has missed a deep feeling of satisfaction if he has never created something, or at least completed something with his own two hands." - Dick Proenneke

I still has many of his patches from his time serving. 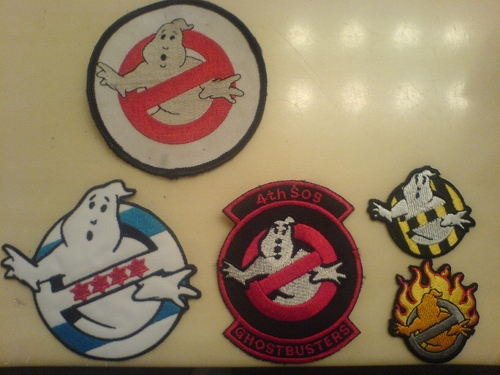 By AF-Ghostbuster -  January 1st, 2011, 9:11 pm - Posts: 46
-  January 1st, 2011, 9:11 pm #292991
Borzou, I knew about the 4th SOS patch, but i want to try and stay away from heritage patches already in exhistance. BlkMesaHero, If I can get more people interested, that are in differant branches, I think it would be awsome to have a "joint task force" kinda thing between all branches. (or whichever branches are represented with the personnel)
Rednecks last words.."Hey ya'll...watch this!!"

With every fiber of my being, I hate every single one of those guys on my base.
Twitter: @ThatNerdInATie
Don't quite understand Instagram yet, but...: thatnerdinatie

I'd be up for this, but only if the patch doesn't look anything like the USAF Security Forces personnel badges.

With every fiber of my being, I hate every single one of those guys on my base.

You know those Rip-It energy drinks? I pulled up to a Force Protection checkpoint once when I was in the Middle East and the FP dude had 7 empty Rip It cans on his window sill, and he said he'd only been on shift for about 2 hours. He was extremely sketchy, lol... and they let these people carry loaded guns. Actually I believe another one of them shot himself in the foot while I was on tour, as well. Quality.
Ricky T

"Cricket? You gotta know what a crumpet is to understand Cricket!" - Raphael

Anyway, does anyone else with Photoshop skills want to try their hand at the symbol?
Rednecks last words.."Hey ya'll...watch this!!"

Quick and dirty mock-up, using a basic AF patch - it has the muted colours (browns), but that's up to you guys how combat you want it. I assumed colour would be wanted to some degree, hence the logo kept colours and the wings are in (mock-up) gold. All elements can be tinkered with, colour-wise.
Planet Ghostbusters
twitter.com/ProtonCharging
facebook.com/ProtonCharging
The Crossrip Podcast[/color]

By Tyrael -  February 23rd, 2011, 7:57 pm - Posts: 665
-  February 23rd, 2011, 7:57 pm #305453
The logo works pretty well, but I'm not so sure on the "Who ya gonna call?" tagline being where the unit/MAJCOM designator would be. Unfortunately, I'm willing to bet that something like "USAF GHOSTBUSTERS" would get shot down due to use of the USAF name without authorization. :-/
I drew up a patch a while back of the no-ghost guy in fatigues saluting, with "US MILITARY GHOSTBUSTERS" under it, but due to my artistic shyness, I'll leave others to find a link to it if they want to see it. >_>;
Twitter: @ThatNerdInATie
Don't quite understand Instagram yet, but...: thatnerdinatie

Repost your saluting guy - don't be shy. If the artistically inclined see what you had in mind, maybe someone can run with it. I can certainly see good uses for it.

EDIT: Haven't gotten around to patching in the ABU print onto the uniform, either. Job's been really demanding of late and I haven't had much time on my hands.
Twitter: @ThatNerdInATie
Don't quite understand Instagram yet, but...: thatnerdinatie

The logo works pretty well, but I'm not so sure on the "Who ya gonna call?" tagline being where the unit/MAJCOM designator would be.

Some units and commands have their motto's written out in Latin on their patches. How would "Qui Tendis Vocare?" look? (I didn't take latin so that's an online translation of "Who are you going to call?")
"Why don't you take your flashlight and get lost?" - P. Venkman

OH! And as an alternative (and equally applicable to the armed forces)

So, slightly tweaks - I don't have the (nor the skill, I don't think) to attempt a uniform and cap on the ghost. And certainly that mock-up salute needs proper doing (he's got wee stubby arms!)

There's nothing specific that denote a branch of the armed forces and I had a thought - what if you extend the shield up and create a negative space, where a member can get a small patch of service, and put it there, on top. That way, only one patch needs production, and the individual modifies on top to suit their personal situation.

This is assuming that all armed forces have little wing, rifle, anchor insignia, like the Canadian armed forces (I've seen these in surplus shops a lot.) Or small regiment/unit flash, like below (no disrespect to the Dirty Four Dozen, I just had a tough time quickly finding another patch like I had in mind);

The ridiculousness of taking the time to identify […]

Actually I ended up using a programmable sound boa[…]

Its most likley someone whos followed rumors conne[…]

Thanks for the kind words. Being helpful is my goa[…]