I recently watched the stream / DVD rips of Real Ghostbusters and after 30 years the transfer isn't holding up so great. There's also little chance of an official remaster - certainly not at 4K or widescreen ratio.

With that in mind I took to remaking part of the intro. The original plan was to animate but this poses a challenge due to how the perspective is animated and the muddy quality of the existing streams, so inevitably the task will require making some changes which deviate from a straight remaster and also add a lot of extra time. So for now I settled on attempting to remake a single scene - redrawing the background detail at a higher resolution and overlaying an offset RGB channel blur to replicate CRT glow.

The plan is to keep working on scenes from the intro, potentially with a view to animating (may not be feasible).

Let me know what you think. 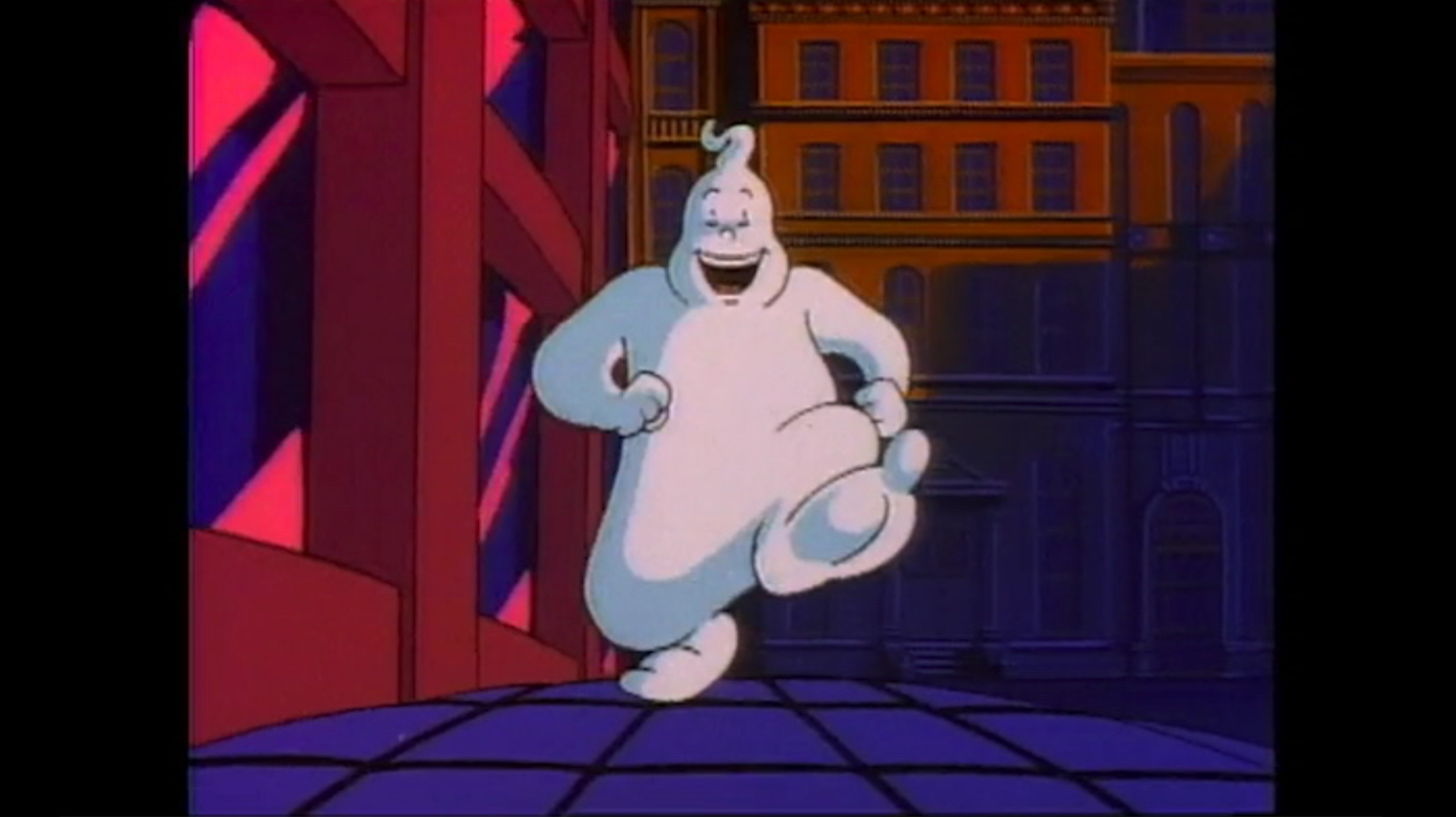 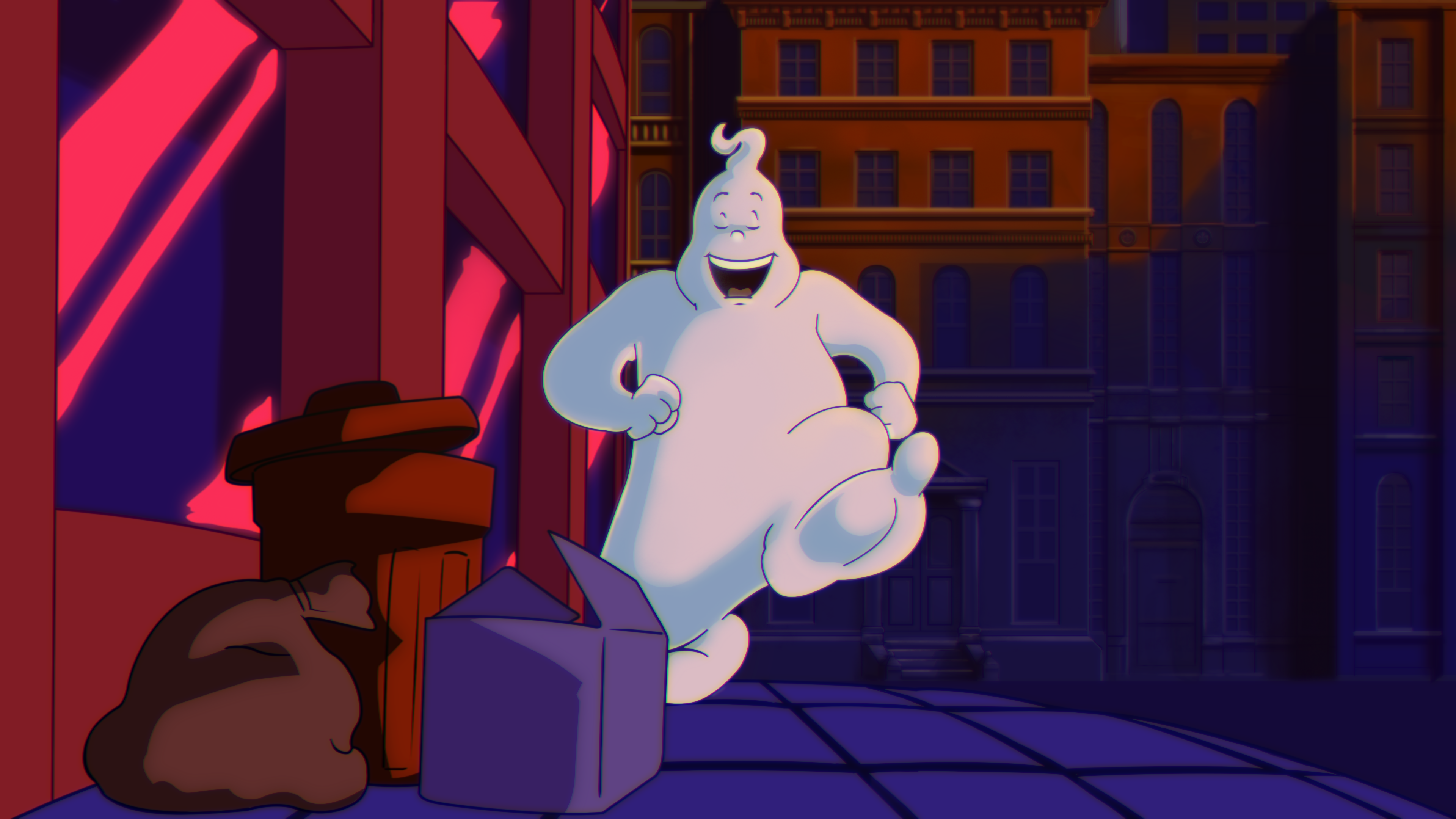 Kingpin wrote:I'm loving what I'm seeing, and I'm quite envious of your skill at replicating matte background paintings.

Cheers, it took a while - I drew it all out in Photoshop and used gradient / paintbrush on the relevant areas - it looks a lot sharper before I add the RGB blur effects.

Thankfully a lot of the shots have simple or obscured matte backgrounds. Next up is the Egon and Ray reaction shot.
Kingpin liked this

Bison256 wrote:Could you use something like waifu2x? The Real Ghostbusters was animated by various Japanese studios in an proto anime style. I've been thinking of trying this myself if I get enough time and can free up enough of hd space I'd need.

Specifically waifu2x - not to my knowledge. There are too many limitations and I ran the original through at their maximum size and it came out looking just as rough. But maybe there are settings or tools out there that improve the result.

There is some up-res software emerging for game emulation which might do a better job. Someone recently converted the Curse of Monkey Island intro to HD and it looks incredible but it involved manual work too.

I'd be interested to see your results but with these old cartoons we don't have the original source, and the image quality has bad artefact - I imagine it would need a lot of work in addition to the automated process. Plus you wouldn't get widescreen conversion. Though obv if it worked that'd be great!

One final thing - with the example I posted above - I am aware the top floor of the background building is misaligned compared to the original and that is something I will fix if I ever went to animate - I had considered reaching out to the community to see if we could get more artists and importantly animators involved - but collaborations bring their own challenges and I thought I'd keep it consistent as a personal goal for now. Of course if others wish to have a crack at it, or can use digital wizardry to shortcut the process, then I can retire or move on to stills from the shows themselves.

Would love to fully re-animate "Knock, Knock" in 4K with a few tweaks - but kind of a pipe dream , not to mention a mammoth amount of work. Plus there's the risk of being hit with a C&D if the franchise is popular again.
Last edited by Chicken, He Clucked on August 3rd, 2020, 4:20 am, edited 2 times in total. Kingpin, RichardLess, ccv66 and 6 others liked this

If you ever got INSANE and went for a full episode down the road I nominate Knock Knock or Revenge of Murray The Mantis!
zeta otaku liked this

Since it looks like you did this digitally, you really capture the ink & paint style and aesthetic. Which is no easy feat. Great job.

How long did it take you to complete a single frame? Like the one here?

Sometimes I really hate copyright law because this is something I would totally donate a lot of money too for a handful of episodes to be remade like this on Kickstarter. Sony isn’t doing anything with the cartoon remastering wise, so why not? But damn copyright law. Maybe you could argue for “fair use” somewhere in there. But I doubt it. Plus it would take years to complete if you go solo.

Since it looks like you did this digitally, you really capture the ink & paint style and aesthetic. Which is no easy feat. Great job.

How long did it take you to complete a single frame? Like the one here?

Cheers, appreciate it. I wanted it to look high-def but also retain the warmth of the CRT fuzz.

So, in real-time man hours, 2-3 days work, but I did an hour or two here and there inbetween other projects - which ends up taking longer as you get out of rhythm. Plus I had it sat around for months. I could work on a much quicker turnaround.

Sometimes I really hate copyright law because this is something I would totally donate a lot of money too for a handful of episodes to be remade like this on Kickstarter. Sony isn’t doing anything with the cartoon remastering wise, so why not? But damn copyright law. Maybe you could argue for “fair use” somewhere in there. But I doubt it. Plus it would take years to complete if you go solo.

Yeah it's a pain. If I was doing this full time and animating the intro at least, then I think it would be quicker to finish than you'd expect, because some frames are very simple, re-use static backgrounds and the individual frames would take less tweaking because the "post-processing" effect would be applied to all frames at the end.

For full episodes you'd need a team and crowdfunding isn't worth considering with the copyright issue. I figure drip-feeding a few frames into the community will avoid upsetting anyone as it's akin to "fan art".

But if someone at Sony wanted to cover my salary I'd be more than happy to take on the job hah!
Wafflerobot liked this

I’m sure at least Ghost Corps would give some recognition of your amazing work!

Wafflerobot wrote: ↑September 11th, 2020, 4:00 pm These really are amazing! I wonder how easy it would be to get one of these printed and framed.

I've contemplated putting them on Redbubble but obviously it's such a grey area - people do it and it's hit and miss whether they get taken down. But feel free to use the image above if you want to run off a print for yourself - there are lots of options out there.
Wafflerobot liked this

I went straight into the next one and chose a simpler cel to get it done quickly, but then I had a couple of other projects I needed to divert my attention to so stalled again. Seeing the posts here will definitely get back to it asap!
ccv66, Wafflerobot liked this

I don't think I'm allowed to link directly, but I just wanted to let anyone know if they're interested in prints or clothing featuring either of the designs posted here so far, I've created listings on my Redbubble account.

Ectojeff88 wrote: ↑September 2nd, 2020, 2:17 pm Could you potentially get just the show intro reanimated with this method similar to the original promo restoration?

I’m sure at least Ghost Corps would give some recognition of your amazing work!

^^^ this
co-worker: hey the going away party is in the back
me (with new mullet): oh i know where the party is

The title sequence is just over a minute in length, and the animation may've been 12fps. Assuming the title sequence was animated at 12fps, that's roughly 720 individual frames that Chicken, He Clucked would have to draw and colour, and then there's the additional work recreating the backgrounds.

Chicken, He Clucked noted that it takes him roughly 2-3 days to render a single frame, as it's done in his spare time. If he were to animate the whole sequence in his spare time, it could take a number of years to complete.

I'd love to see it happen, but we have to be realistic, guys.
Nighty80 liked this
Feeling overwhelmed by the Covid-19 pandemic? Please visit The Support Thread.

Until that magic day arrives, I am happily looking forward to more stills from the intro.
I’m sure the shot of the Firehouse Ecto Exit will be glorious!
Kingpin liked this

I'm sure they'll have some kind of quick explanati[…]

Mark, I previously told Kingpin that Jersey was s[…]

I've touched on painting the shell here on this Pr[…]